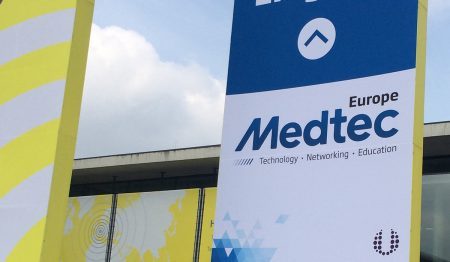 MCS was invited as one of twelve eHealth startups to present at MedTec Europe 2017 in Stuttgart, Germany. MCS’ CEO Suheib Mousa presented the SmarKo Health© System to an audience of investors, eHealth experts, exhibition visitors and journalists.

Mousa focused on the customization that is possible within the unique SmarKo© hardware and software system. While currently the system contains a pain management component, efforts are underway to integrate third-party diabetes diagnostics instruments from third parties, expected to be finished by end May 2017.

SmarKo© is laid out such way that it can be used for multiple and specific purposes, using FHIR as a main standard. This ensures a wide variety of third party devices can attach to the system and deliver data from patient to doctor.

Mousa also stressed the real-time communication functions in real-time audio, video and texting, as well as automatic and manual alerts.

SmarKo© itself contains its own hardware device, a wrist wearable that is mainly used for collecting and transmitting vital data, including motion data. It can be used as a stand-alone or complementary to specialized third party devices. ‘The SmarKo© wearable is a sleek device that itself can be customized. Numerous, specifically needed functions can be integrated on a very small space’, said Mousa.

Following the 5-minute pitches, an international jury provided comments and suggestions to the teams.

MedTec is a leading European medical exhibition, conference and trade fair. 601 exhibitors participated from 76 countries. Almost 5,000 matches were generated. The event serves as a trading, networking and learning platform. eHealth will continue to be a focus at MedTec Europe 2018.

MCS Presents to Berlin IT Community

As part of the series ‘Companies Introduces Themselves’, MCS Data Labs presented to the Berlin-Brandenburg…

Networking the physical with the virtual world is rapidly moving forward. Technologies developed around the…

Press Release
Recent Posts
I am the footer call-to-action block, here you can add some relevant/important information about your company or product. I can be disabled in the theme options.
Get In Touch